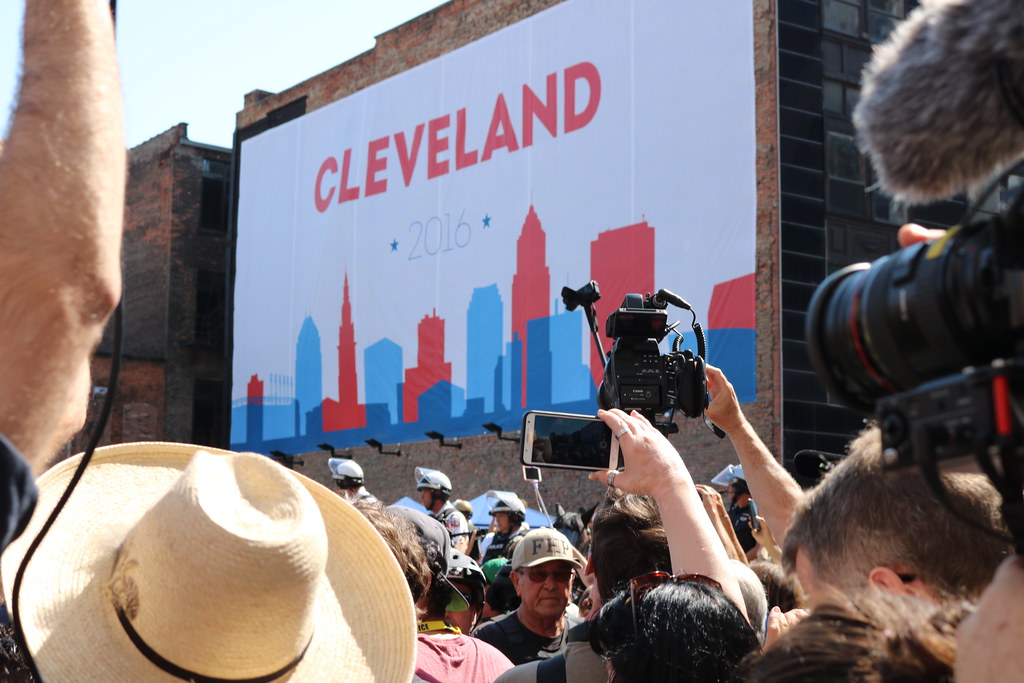 When I landed in Cleveland last week, I had 14 pages left of Game Change.

I didn’t know what to expect, had never been to a convention before, and while the collective conjecture of a “total shitshow,” was amusing, it was not helpful. That prediction proved accurate for the first 48 hours, then escalated in the final two days, even before Ted Cruz took the stage Wednesday night.

It was mid-afternoon when a crowd assembled around the entrance of the Q, Cleveland, Ohio’s center of gravity during the RNC. I abandoned my laptop and armed myself with a camera, running outside to see what all the commotion was about. At first it was just the media, aiming their massive black cameras over each others heads and inching closer and closer to a supposed protesters. Then there was the cops, a – of them, yelling for the press to move back and some sort of liquid was sprayed, forcing those in front of me and behind me to press backwards without dropping their equipment. I ducked out of the way after the man in front of me stepped on my foot.

The crowd had grown at this point, but maintained a humble volume. There was no roaring chant, no clear message. I looked around, wondering what the point of this demonstration was. I stood on my toes, trying to read the signs placed in front of the entrance.

They read:
“REVOLUTION – NOTHING LESS.”
“AMERICA WAS NEVER GREAT.”

I heard whispers of an attempted flag burning. But where was the smoke? Protestors at the RNC, Photo courtesy of Haddad Media

Behind me a train of police swept by, escorting three men with three-tiered signs. Sporting phrases like “The Pope is the Antichrist!” On their tail was a much shorter man holding up a piece of canvas which had “End the War on Drugs” sprayed in red and black ink.

I stepped back to the sidewalk to try to get a clear shot of what was going on. The masses were evenly matched with police, who maintained all the composure of a statue. Patient but firm, they sought order in squads of 5 or 6. A loud crack tore a hole in the murmurs and whistles as one of the signs snapped and fell two feet from where I stood. I discarded the recovery of the asset for the sound of some SJWs who looked like they hadn’t showered in at least 5 days.

At this point, I was just confused. The flag burners were communist and the evangelicals, however dramatic, were far from anti-semitic nationalists. I learned later that the lady who had attempted to burn the flag had accidentally set herself on fire. It had to be the most ineffective protest I had ever witnessed.

I also found that this convention celebrated an ineffective use of language. The speeches lacked clarity, having resembled poorly written high school essays in both accuracy and flow. It was as if the whole convention had adopted Trump’s staccato speech pattern and on-the-spectrum scream. The only speeches that didn’t fit into this category were those of his children, Tiffany, Don Jr., Eric, and Ivanka. His children strike me as closeted democrats, or maybe they’re just normal republicans. I might have too much faith in language and fail to understand the appeal of these “outsider” tactics aimed at the disillusioned. But is “dumpster fire” the kind of locution the American voter wants to hear from a potential president? Police outside of the Quicken Loans Arena, the site of the RNC, in Cleveland, Ohio, Photo courtesy of Haddad Media

In Niccolo Machiavelli’s book The Prince, he questions if it is better to be feared or loved.
“A prince should inspire fear in such a fashion that if he do not win love he may escape hate.” He writes.

I don’t think Donald Trump has read this book, and if Paul Manafort has, he certainly isn’t applying that principle to Trump’s campaign.

On Monday morning, I sat in on a Bloomberg breakfast hosted by Al Hunt, where 15 reporters sat around a table and asked Mr. Manafort about the week ahead. He talked circles around each question brilliantly. His plan followed a disregard for the numbers; their plan to gain the loyalty of the Republican base and bring in people who have never voted before does not seem realistic for the general election. Trump will sway almost no Bernie supporters, maybe a few independents, but millennials and college educated women still despise him.

They can paint Donald Trump as a savior in a dark, dark world, like the light at the end of the establishment-built tunnel, but a win for the Trump campaign just isn’t very likely.

When I landed back home in Washington two days ago, I was happy to find the White House was somehow still standing. And I resumed to add a copy of Double Down was sitting in my Amazon cart.

I guess this ineffective, confusing, “dumpster fire” of a world will just keep spinning, no matter what happens.

You can catch more of my reporting from the conventions for my podcast, Volta Insider here.