On the latest episode of Bloomberg’s Masters in Politics podcast, Tammy Haddad and Betsy Fischer Martin spoke to media writer extraordinaire Jim Rutenberg about how candidates manipulate the media or hide from it in order to control the narrative.

According to Rutenberg, journalists are finding it difficult to remain impartial this election season with the unprecedented rise of Donald Trump and his near-daily controversies. “All the focus on Trump takes some of the onus off of Hillary Clinton, who almost gets rewarded for not doing press conferences. I think her refusal to do press conferences is disgraceful,” Rutenberg said. “The email story and the stories about the interplay between her foundation and the State Department, which is a story that broke last week. We have to chase that really hard.”

Rutenberg also discussed the Trump campaign’s decision to bring on Roger Ailes to assist with debate prep. “They just spent the weekend together, Ailes and Trump. Here’s the thing about Roger Ailes, whatever you say about him, he is the best living television strategist and producer and maybe the best of all time, one of the best for sure. He knows how to game moderators, he knows how to work a debate, he invented it! He will be a formidable tool in Donald Trump’s toolkit. Donald Trump knows how to debate, sure. But he doesn’t know how to debate in a general election. He couldn’t have a better or more politically potent coach than Roger Ailes.”

You can listen to the full interview here.

Bloomberg Masters in Politics hosts Tammy Haddad and Betsy Fischer Martin interviewed Hillary Clinton’s man leading her campaign’s ground efforts. Marlon Marshall, state director for all 50 states, broke down the strategy for this year’s battleground states. In their conversation with John Dickerson, host of CBS News’ Face the Nation and the author of the new book Whistlestop: My My Favorite Moments from Presidential Campaign History, they discussed news that Donald Trump has recently enlisted former FOX News chairman Roger Ailes to assist with debate prep.

Many have pointed to Utah, which has solidly voted Republican in presidential elections since 1968, as state Clinton could pick up. According to Marshall, “President Clinton was out there the other day. He did a meeting with some community leaders in Utah. I think a lot of public polls will show Utah to be closer than one would expect. I attribute it to a couple of things: One, I think our message is resonating on the economy and what Hillary wants to do to build an economy for everyone and not just ones at the top. But I do think Trump’s rhetoric is very divisive rhetoric. In some states it’s really turning people off. I think in a state like Utah, which is typically more conservative, they’re saying, ‘This is not the type of person who should represent this country or our state.’ So, are we going to win Utah? I don’t know. But is it something that’s on our radar? Yeah, we’re gonna take a look.

When it comes to the differences between Trump’s ground game and Clinton’s Marshall says, “I think, one, we just have a general belief that organizing matters. I think you’ve heard out of his mouth that these big rallies and other things are kind of what he’s done in his campaign. I think rallies are good. One of the things you’ve probably seen us doing at rallies, when we have rallies, we actually are signing people up as potential volunteers.”

The hosts also caught up with John Dickerson to get his take on Trump’s new hires, Breitbart exec Stephen Bannon as the campaign’s chief executive and veteran GOP pollster Kellyanne Conway as Trump’s new campaign manager. Dickerson also discussed the optics of a Trump-Ailes alliance given Ailes recent controversies. “You can imagine a more traditional campaign not wanting to be associated with a figure who’s in the news for allegations that Ailes has been but Trump doesn’t really give into that kind of stuff. Will it help? He’s had a pretty good track record. What will be interesting is Donald Trump has a pretty big base of support but he needs to build his support with voters who want him to behave a little bit differently. And the question is whether he can behave differently, whether he wants to, and whether you can even imagine what behaving differently means in this context.” 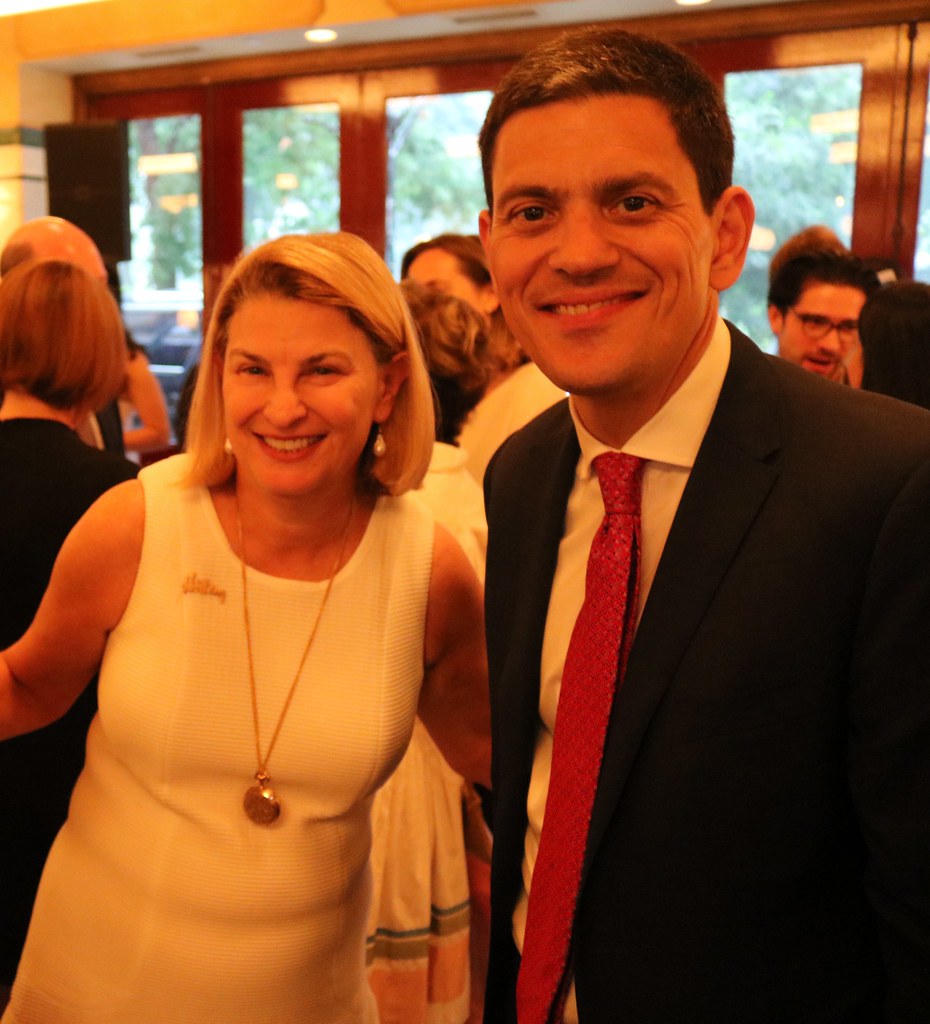 On the last night of the Democratic National Convention it was standing room only at a reception honoring David Miliband and supporting the work of the International Rescue Committee, an NGO that provides relief for refugees of war-torn countries such as Syria and other humanitarian crises. The event was co-hosted by Democratic heavyweights Sally Susman, Mona Sutphen, Tom Nides and Maureen White at Parc in Rittenhouse Square.

Sally Susman is Executive Vice President of Corporate Affairs at Pfizer and to learn more about the International Rescue Committee click here.

Julianne Donofrio’s six-years-in-the-making film is set to debut August 11th at the national Quilt Trail Gathering in Greeneville, Tennessee. The film follows Donna Sue Groves, who started the quilt trail movement, where quilt squares are hung on barns along driving routes, creating an elaborate network that combines art and travel in unlikely places.

The feature length documentary, “Pieced Together,” follows Groves as she navigates through personal hardship and sheds light on the movement she began with her neighbors in Adams County, Ohio.

The quilt square movement has sprung up from this small community and has now gone nationwide, with trails in over 40 states and more forming in Canada and elsewhere.

Ms. Donofrio is a veteran filmmaker and news who previous worked for ABC News and Haddad Media. She is a graduate of Syracuse University.

You can find out more about the National Quilt Trail Gathering here.

Be sure to check out this interview with filmmaker Julianne Donofrio here. Barack Obama is an incredibly impressive orator. He speaks with grace and power, his words suffused with purpose. He has mastered a voice that exerts both authority and emotion without pontificating. There is an honesty in his cadence that slightly resembles that of Bill Clinton, a speech delivered in a style that isn’t really a speech, but more of a conversation. That night, President Obama and the American people had a conversation about something our President knows quite a bit about, the audacity of hope. And trust me, there wasn’t a dry eye in the entire arena.

I was enamored by his remarks, but it wasn’t until the crowd resurrected the famous slogan “YES WE CAN” that I was deeply affected. It was within those seconds I was, as Fitzgerald writes, “…within and without, simultaneously enchanted and repelled by the inexhaustible variety of life.”

I was transported eight years back, to television clips of people shouting “YES WE CAN” in massive crowds. Struck with the absoluteness of the change he has brought about and the love the American people share with him because of it.

“Time and again, you’ve picked me up. And I hope, sometimes, I picked you up, too. And tonight, I ask you to do for Hillary Clinton what you did for me. I ask you to carry her the same way you carried me. Because you’re who I was talking about 12 years ago when I talked about hope. It’s been you who fueled my dogged faith in our future, even when the odds were great; even when the road is long. Hope in the face of difficulty. Hope in the face of uncertainty. The audacity of hope.”

I knew then why Barack Obama had won back in 2008. Fear is subjective, but hope is indefinite. I looked down towards the stage, at the side of his face and the corner of the podium. Compelled by the sadness in his stance that lifted a little bit in each word he spoke and the arena got smaller and smaller. As if there were not millions of people behind those big black cameras scattered among skyboxes. That speech was a love letter to this country. If Shakespeare wrote speeches for the King of England, it would probably sound something like what we heard that night. 46 stunning minutes when all I could think was: that’s my president.