White House Correspondents Association President and Bloomberg News White House reporter Margaret Talev released a statement saying, “The White House has informed us that the president does not plan to participate in this year’s dinner but that he will actively encourage members of the executive branch to attend and join us as we celebrate the First Amendment. In keeping with tradition, Press Secretary Sarah Sanders also will represent the administration at the head table. The April 28 dinner celebrates award-winning reporting, scholarship winners and the vital role of the First Amendment and the free press in American democracy.” Michael Wolff’s bestselling tale of White House palace intrigue, the bestselling Fire and Fury, has been set to be adapted into a television series for a yet-to-be-determined network since its publication in January. Details about the eagerly anticipated series have been slow to come out but, on Wednesday, March 28th, The Hollywood Reporter has learned that Emmy Award-winning filmmaker Jay Roach is set to direct the series.

Roach is well known as the go-to director for all things political, having directed Game Change about the 2008 presidential election, and Recount, which details the Florida recount that determined the fate of the 2000 presidential contest, for HBO Films. He also directed the feature film Trumbo, starring Bryan Cranston who was nominated for an Oscar for his performance as blacklisted writer, Dalton Trumbo.

Wolff’s book tells the inside story of President Trump and his staff’s first year in power in a fly-on-the-wall approach that gave the author unprecedented access to the administration’s power brokers. The book made headlines for weeks fueled by President Trump’s denunciation.

Television rights to the book were secured by Endeavor Content days after the book was released. The deal reportedly netted Wolff a seven-figure payday. The book itself has been wildly successful, topping the New York Times’ bestseller list for 10 straight weeks and has sold over 2 million copies in the US.

Jay Roach will also serve as executive producer of the series along with Michael Wolff, BBC exec Michael Jackson, and John Lyons.

You can read more details about the series here. Justin Kintz, the head of policy and communications for Uber’s American operations, took the stage to introduce Burr and noted her policy experience including working on the Hill with Majority Leader Kevin McCarthy in the House, to working with Jon Kyl in the Senate.

Kintz also talked about Uber’s recent inroads in DC, “In addition to having a local presence here in the district, this is also our east coast hub for the US. We have our operational leaders here in the room tonight who run UberEats in the US, and who run our US operations. This is a nerve-center for Uber, our third-largest office in the country. We’re very proud of our presence here.”

She went on to discuss some of Uber’s latest initiatives saying, “I’m thrilled to be a part of the team, whether that is to help educate drivers about human trafficking, or whether that is the work we have been doing with the National Centers for Missing and Exploited Children. There’s so many powerful things we can do with this fast, fast platform, not to mention the work that we will do on the federal level with regards to infrastructure.” Among her Uber colleagues at the event were Raj Naik, the general manager of Uber Eats for the mid-Atlantic region, Todd Brewer, from Uber Military, Dave Marmore from the Policy team, Malcom Glenn who coordinates Partnerships, Bill Gibbons from comms, and Carly Debeikes from comms and operations. 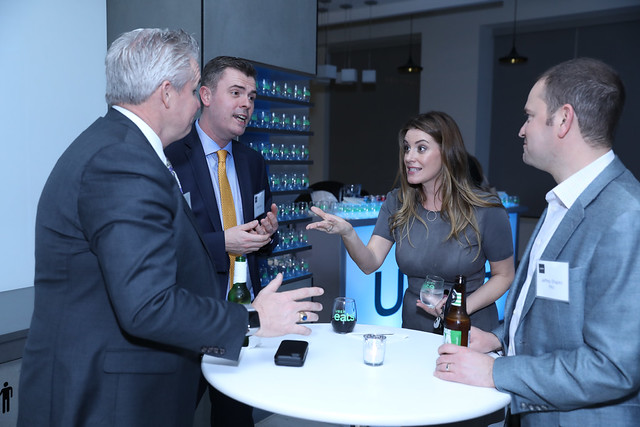 The cast and producers of VEEP, Photo courtesy of Haddad Media

The Veeples took the stage at the 24th annual Screen Actors Guild Awards, which were held Sunday evening, January 21st, as HBO’s VEEP took home the night’s biggest trophy for comedy for its sixth season, and the show’s star Julia Louis-Dreyfus won the award for best actress in a comedy. Haddad Media CEO Tammy Haddad serves as a consultant on the show.

“I was hand chosen because I play a spokesperson — I’m very well-spoken on the show and in real life,” said Matt Walsh, who plays press spokesperson Mike McLintock, on the show.

VEEP has a long list of awards, winning outstanding comedy at the Emmys for three consecutive years, while Louis-Dreyfus has won best comedy actress at the Emmys six years running!

While HBO has not announced the premiere date, VEEP’s seventh and final season is sure to be can’t-miss TV. Pittsburgh, PA, one of the candidate cities in Amazon’s top 20

The business community has been eagerly anticipating Amazon’s announcement of the location of its new headquarters, or HQ2, something the company’s founder and CEO Jeff Bezos, who recently became the richest man in the world, has been teasing over the past year.

On Thursday, January 18th Amazon released its list of 20 city finalists. Cities and municipalities around the country have been vying to become home to Amazon’s white-collar workforce, offering tax incentives and prime real estate deals.

One of the most discussed candidate cities, Baltimore, Maryland, did not make the list. According to the Baltimore Sun, “Amazon said it was looking for cities that could provide an initial 500,000 square feet of space, preferably in an urban or suburban area, with access to major highways, airports, public transportation, and a robust technology workforce.”

Here’s the list of 20 contenders to become the host city for Amazon’s HQ2: Don Nash and his wife at the White House Correspondents’ Dinner

Libby Leist, the senior producer for NBC’s The TODAY Show, will be moving into her new role as executive producer for the show’s 7am and 8am hours according to a statement by NBC Chairman Andy Lack on Wednesday, January 17th. Libby will be replacing 23-year TODAY veteran Don Nash, a longtime producer for Matt Lauer, who has produced The TODAY Show since 2012. Nash will be retiring to spend more time with his family.

According to Lack, “Libby brings tremendous talent and experience to this role, having served as senior producer of the 7am hour for the last 5 years. She has led the show’s political coverage and special events, including candidate town halls and TODAY’s historic broadcast from inside the White House. Libby has spent her career at NBC News, starting as a desk assistant in DC in 2001, and later rising to become Andrea Mitchell’s State Department producer – a role for which she traveled the world – and then several senior producer roles in the bureau, including MSNBC’s The Daily Rundown and Capitol Hill producer.”

The move follows NBC’s decision to make Hoda Kotb a permanent anchor on the show alongside Savannah Guthrie this January, making this the first time The TODAY Show has an all-female duo.

The TODAY show couldn’t be in a stronger position. Savannah and Hoda have seamlessly taken their seats and we’re off to a fantastic start in 2018. This is a tribute to them and the whole team at TODAY.

With this change in anchors, and having rethought some of his priorities, Don Nash has decided to step away from his Executive Producer role at TODAY.

I cannot thank Don enough for everything he contributed in nearly 30 years at TODAY – almost half of the show’s 66-year history. He led the TODAY team through many transitions and got the show back to number one. He leaves with every aspect of the show on top and with a legacy he should be proud of.  As you all know so well, among many other skills Don is one of the best live control room producers in the business. We’ve offered him a number of roles within NBC News and NBCUniversal, and we hope he’ll stay in the family.

Don leaves a big hole at TODAY, but we are so fortunate to have extraordinary producers who can step up.

We are pleased to announce that Libby Leist is being promoted to EP of TODAY’s 7am and 8am hours. Libby brings tremendous talent and experience to this role, having served as senior producer of the 7am hour for the last 5 years. She has led the show’s political coverage and special events, including candidate town halls and TODAY’s historic broadcast from inside the White House. Libby has spent her career at NBC News, starting as a desk assistant in DC in 2001, and later rising to become Andrea Mitchell’s State Department producer – a role for which she traveled the world – and then several senior producer roles in the bureau, including MSNBC’s The Daily Rundown and Capitol Hill producer.

Libby will report to Noah, and will work closely with Tom Mazzarelli who will continue in his pivotal role for the show; as well as with Jackie Levin, EP of the 9am, Tammy Filler, EP of the 10am and Matt Carluccio, EP of weekends.

Please join me in wishing Don every success in his next endeavor and congratulating Libby on her promotion.

Join us as we talk about how to deal with awkward situations, how to not take things personally (or too seriously), and how not to behave while a guest at 1600 Pennsylvania Avenue. Volta Insider host Rachel Greenberg met with Jeremy Bernard and Lea Berman, both former White House Social Secretaries, about their new book Treating People Well: The Extraordinary Power of Civility at Work and in Life, which takes a look at the ins-and-outs of professional and personal etiquette.

Greenberg got the scoop on working at the White House with presidents and First Ladies, got advice on etiquette, and learned what it means to “radiate calm”.

You can listen to the latest episode of Volta Insider here.

Order The Extraordinary Power of Civility at Work and in Life here.