Vivek Kundra was America’s first Chief Information Officer assigned by President Obama to help the White House look forward and integrate new technologies for government. He reviewed government agencies and saved billions of dollars for the government and now he is taking all that knowledge to work globally at Salesforce.  Here is what the New York Times Quentin Hardy wrote: 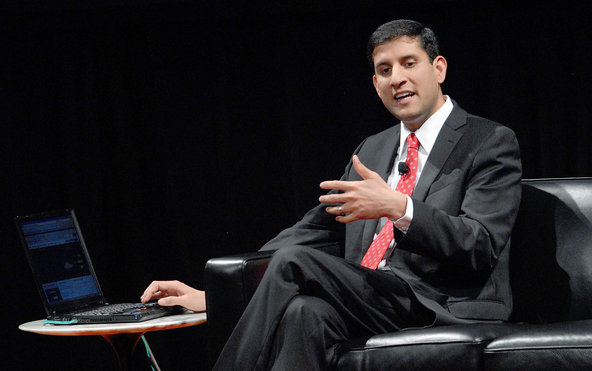 Jonathan Fickies/Bloomberg News
Vivek Kundra, the executive vice president of emerging markets for Salesforce.com, said he would use his experience and connections to reach out to governments everywhere.

Salesforce.com, best know for its sales, customer service and collaboration software for business, is raising its ambitions by aiming at the international businesses and sales to foreign governments that have been the mainstays of companies like I.B.M.

On Monday, the company named Vivek Kundra its executive vice president of emerging markets. Mr. Kundra was the country’s first chief information officer from March 2009 until August 2011. His job was to move the government’s computer infrastructure spending — $80 billion a year — toward cloud computing. Mr. Kundra has extensive experience in technology at several levels of government, and has been a frequent visitor to the technology industry’s conferences.

Mr. Kundra said in an interview that his work would consist of showing “how Salesforce can close the technology gap” between traditional business and the faster-moving industry typified by consumer applications like Facebook andTwitter. Governments, and many overseas businesses, he said, “are still focused on the old model.”

At present, nearly 68 percent of Salesforce’s revenue is from the United States and Canada. Another 18 percent is from Europe and the remaining 14 percent is from the Asia-Pacific region. Africa and the Middle East are not broken out as separate regions. I.B.M., by comparison, has selected Africa as one of its top growth markets.

Though his title indicates he will oversee development and sales in places Salesforce barely reaches, Mr. Kundra indicated he would use his experience and connections to reach out to governments everywhere.

“The developed nations are all facing challenges in terms of their financial health,” Mr. Kundra said. “They can look at their operating expenses and see Salesforce as a disruptor.” He said that Salesforce would present itself to developing nations as a provider of “new services,” like health care delivered over mobile networks. The overall strategy will be developed over the next few months, he said.

The main benefit of Mr. Kundra’s experience may be in cost savings, as well as project implementation. “When I was in the public sector, $26 billion of that $80 billion was in projects years behind schedule or not working,” Mr. Kundra said. “The cloud can save money. I’ve seen it first hand, whether in D.C. or in the federal government.”

Given his relatively short tenure in the federal government, the cost savings produced during his time there was not clear. Mr. Kundra has also worked in similar jobs for the State of Virginia and the District of Columbia, where the installation ofGoogle Apps, instead of traditional office productivity software, was said to have saved about 87 percent.

Mr. Kundra has also been an outspoken advocate of sharing government data with the public as a means of creating low-cost information and business software applications.

“America’s trifecta of cable news channels, Fox News, MSNBC and CNN, are just about ready to show off their election year staffs.

Each channel plans to cover the one-night Iowa caucus for a stretch of several days, maximizing both their investments in the state and the ratings potential of a Republican presidential campaign.

On caucus night, Jan. 3, each channel will replace its usual prime time schedule with special reports. The extensive coverage plans highlight the importance of politics to the bottom lines of the cable news channels.  Past ratings indicate that the more seriously the channels treat events like the Iowa caucus, the more viewers tune in. So the networks are starting early.

Candy Crowley, the chief political correspondent for CNN, will report from Iowa starting Wednesday. Chris Matthews will anchor his MSNBC show, “Hardball,” from there starting Thursday, and the MSNBC anchors Chuck Todd and Andrea Mitchell will be there starting Friday.

But the coverage will be most visible starting Sunday, when the weekly public affairs programs like “Fox News Sunday,” anchored by Chris Wallace, and “State of the Union,” anchored by Ms. Crowley, will emanate from the state. On Sunday at 8 p.m. Eastern, both Fox and CNN will have caucus previews.

On Monday, the day before the caucus, more cable anchors will plant themselves in Iowa, including the Fox News anchor Shepard Smith and the cast of MSNBC’s “Morning Joe.” Sean Hannity also will have his radio show and prime time Fox show there.

A new generation of anchors have stepped up since the last presidential election, so the coverage this year will look quite different than it did on Iowa caucus night in 2008. Back then, Brit Hume and Mr. Wallace led Fox’s coverage; this time, the co-anchors will be Bret Baier and Megyn Kelly.

They will both be in Iowa beginning Sunday. On Tuesday, they will be on from 8 to 11 p.m.; Mr. Hannity will then be on until midnight.

Similarly, in 2008, Keith Olbermann and Mr. Matthews led MSNBC’s coverage; this time, Rachel Maddow will be the main anchor, joined by Mr. Matthews and the channel’s other three prime time hosts, Ed Schultz, Lawrence O’Donnell and the Rev. Al Sharpton.

They will be on from 6 p.m. until midnight; then Chris Hayes, a weekend host, will be on until 1 a.m.

Current TV, the upstart competitor to MSNBC, has scheduled four hours of special caucus coverage on Tuesday starting at 7 p.m.

CNN’s top two anchors back in 2008, Wolf Blitzer and Anderson Cooper, will be on again this year, but joined this time by Erin Burnett, who joined the network earlier this year from CNBC. They will also be joined by Ms. Crowley and John King, who will be stationed at his “Magic Wall.”

They will be on from 7 p.m. to midnight, when Piers Morgan will take over for an hour.

CNN, which generally is lower rated than Fox or MSNBC, but benefits from big periods of breaking news, seems to be positioning itself as a nonpartisan option for viewers who perceive Fox to favor Republicans and MSNBC to favor Democrats.

In a news release on Wednesday, CNN’s Washington bureau chief, Sam Feist, said, “As the only cable news channel that has not chosen a side in this election, CNN will tap into the expertise of our anchors, reporters and analysts to equip viewers with information to decide for themselves about the candidates.”

The main anchors for the network news divisions also will be in Iowa for the caucus. Additionally, CBS says that Bob Schieffer, the Sunday morning “Face the Nation” host, will be an anchor on “The Early Show” on the morning of the caucus. “The Early Show” is being replaced a few days later by a new morning program called “CBS This Morning.”

CNN, meanwhile, is using the caucus to introduce its new morning team. On Tuesday, Ashleigh Banfield and Zoraida Sambolin will start their new 5 to 7 a.m. shift, and Soledad O’Brien will start her new 7 to 9 a.m. shift.”

The Obama fundraising machine is aiming directly for Mitt Romney as Iowans are about to hit the Caucus pavement to decalre their presidentialpreference.

Here is the letter that went out to the democrats list today.

While President Obama is travelling throughout the Midwest this week checking in on the American people, he’s also checking in via Foursquare, the location-based networking website. According to the official White House Blog the administration is “excited to launch” the president’s latest venture into social media as he kicks off his economic bus tour.

You can follow the President on the road through Cannon Falls, Minnesota; Decorah and Peosta, Iowa; and Atkinson and Alpha, Illinois. Through the new White House page on Foursquare, you can keep up with the President’s tour and check-in to let your friends know you’re there.