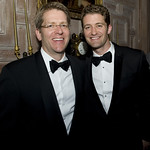 Mr. Carney has options from network TV news divisions to cablers and websites. The top pr firms have been circling him for a while. With unlimited options Carney will definitely be the manager for son Hugo’s band.

Mid-week announcements are the best when it concerns White House Press Pools.

So without further ado, as Fishbowl DC informs us, Ben Feller is the AP’s new White House Correspondent. Feller covered education for the news organization from 2003 to 2006, switching to the White House since then.

This comes after the AP was awarded Helen Thomas’ seat last week. The official memo is below:

END_OF_DOCUMENT_TOKEN_TO_BE_REPLACED

Before a pool was installed for FDR, the Press Briefing Room space was a laundry room, shown here in 1909.

Jake Tapper and Julie Mason talk about the daily WH press briefing from whcinsider on Vimeo.

In part 3 of our interview with The Examiner’s Julie Mason and ABC News’ Jake Tapper – a former print reporter for Salon.com – tell WHCInsider that televising the White House briefing may be bad for journalism.

“An argument can be made while televising the briefing, while wonderful in the interest of transparency, actually hurts the interest of journalism being committed,” said Tapper. “It becomes a show,” added Mason. “And often time’s reporters are judged on the questions they ask during the briefing, when it’s such a tiny part of what we do. It sort of becomes counterproductive.”

Most of the White House correspondents’ work is done outside the regular press briefings … and both Tapper and Mason joked that they had “occasionally fettered access” outside the scheduled briefings.

Go behind the scenes at the White House briefing room here.