White House correspondent, April Ryan, headlined the Washington Women Technology Network breakfast. In an interview with White House Correspondents Insider editor, Tammy Haddad, she described the push and pull of being a White House correspondent and lamented the days when Sam Donaldson was there and all you had to do was shout and raise your hand to get a question in. She reviewed the race record of Presidents Clinton, Bush and Obama, and told stories from her new book, The Presidency in Black and White: My Up-Close View of Three Presidents and Race in America.

She addressed reporters’ concerns that they are not in the room with the President at some events and that this White House often makes announcements on Twitter instead of talking first to the reporters in the briefing room. Co-hosted by Hilary Rosen and Connie Milstein, guests included Robin Sproul, Betsy Fischer Martin, Anita McBride, Karen Appleton, Kelley McCormick, Heather Podesta, Ceci Connolly, Didem Nisanci, and Emily Goodin. The Washington Women Technology Network is comprised of women leaders from technology, media and politics.

White House Social Secretary Jeremy Bernard will be stepping down from his post next month following the Japan State Dinner. His replacement will be announced in the coming weeks.

Statement from Mrs. Obama: “For the last four years, Jeremy has worked tirelessly to open the doors of the White House to as many people as possible and to make each and every event in the White House one to remember, not only for Barack and me, but for the tens of thousands of guests who pass through our doors each year. I was lucky to have such a talented individual on my team, and I am equally lucky to have made a lifelong friend in Jeremy. Jeremy will be missed, and Barack and I wish him the very best in all of his future endeavors.”

Statement from Jeremy Bernard: “It has been an honor to serve the President and Mrs. Obama as Social Secretary for the last four years. From State Dinners to Student Workshops to celebrating the holiday season, Mrs. Obama has welcomed every guest to the White House with her signature warmth, grace and style. I feel so privileged to have worked for such an extraordinary President and First Lady.”

A viewing party to celebrate the fourth season premiere of HBO’s VEEP was hosted at Dog Tag Bakery in Washington, D.C. on April 11, 2015. Proceeds from the evening benefited Dog Tag’s mission to provide education and leadership development for our nation’s veterans.

Watch a clip from the new season below and tune in at 10:30 pm on Sunday!

Radio superstar and Fox News Anchor, Laura Ingraham, is the latest media megaphone to create a news and lifestyle web site, according to Politico.

“Funny or Die is opening a Washington, D.C., office to build on the success of politically minded videos such as President Barack Obama’s turn in the hot seat on Between Two Ferns.

“The new office, which is housed at the 1776 Campus, is being led by former White House staffer Brad Jenkins, who has been named managing director and executive producer of Funny or Die DC.”

“One of the White House’s most beloved staff members has been telling close friends the buzz is true: He is leaving the East Wing. Jeremy Bernard, White House social secretary, bon vivant, party maestro and trusted member of the Obama inner circle is set to officially announce his departure in the next few weeks.” 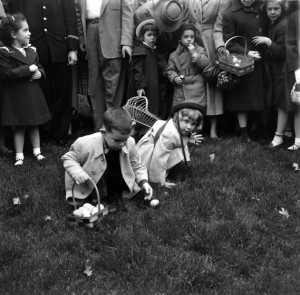 Tomorrow, the First Family hosts the 137th annual White House Easter Egg Roll. More than 35,000 people will gather on the South Lawn to join in the celebrations.

During his first year in office, President Eisenhower restored the tradition after a twelve-year hiatus. Time shares photos from when the event returned to the President’s lawn in 1953.