Kathleen Buhle created a new women’s non-profit social club, The House at 1229, and hosted her first event, on Thursday, May 26th. The intimate gathering brought together a diverse group of women from the non-profit world, business and media for a conversation featuring Dr. Sharon Malone and Michele Norris on women’s health after menopause. 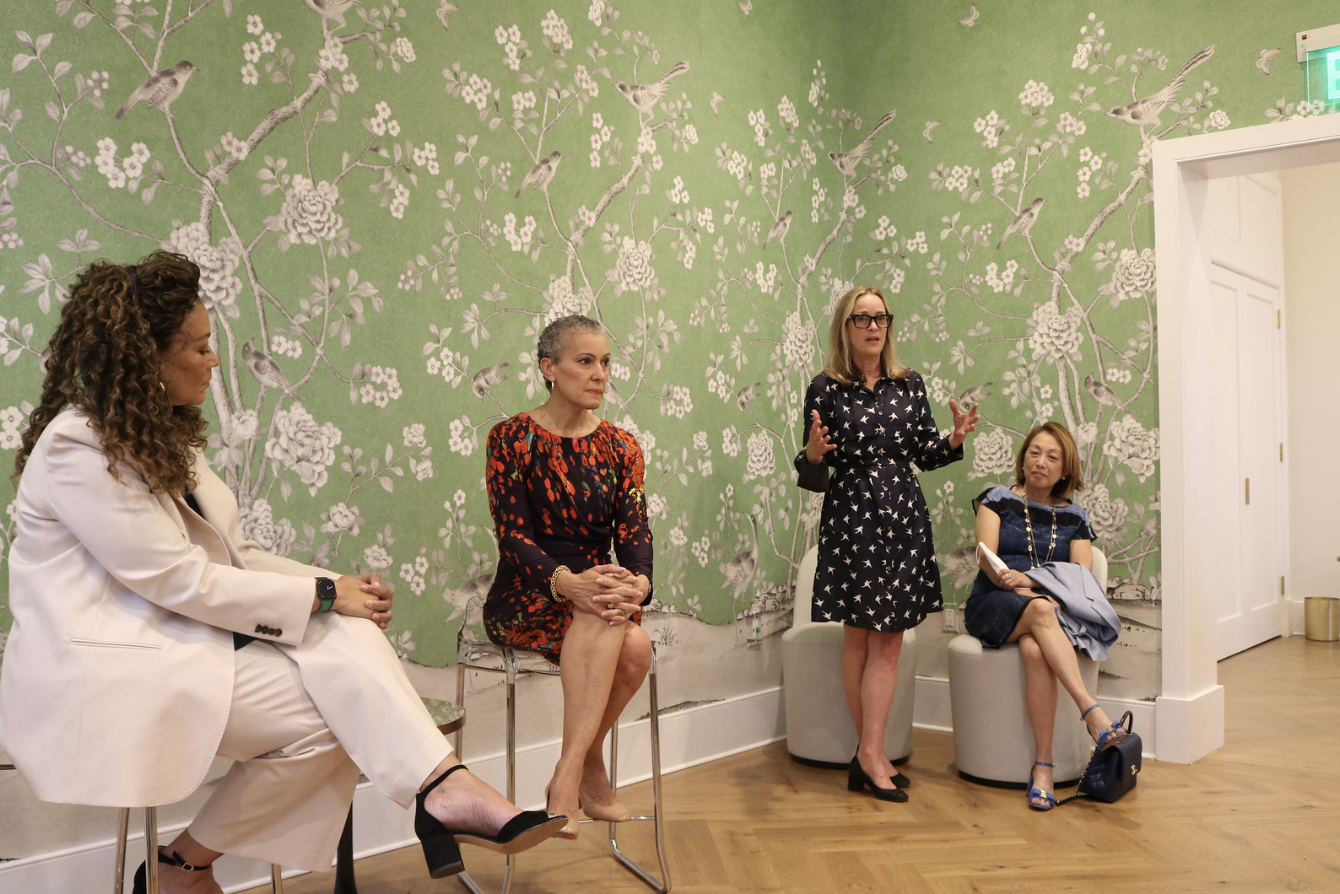 The House at 1229 was founded by Kathleen Buhle as a community of women with different backgrounds and experiences who share the same core beliefs. It’s a civic and social organization, bringing women together to network, foster meaningful connections, and share insight and advice. The headquarters of The House is at 1229 19th Street in downtown DC and will open in September 2022. 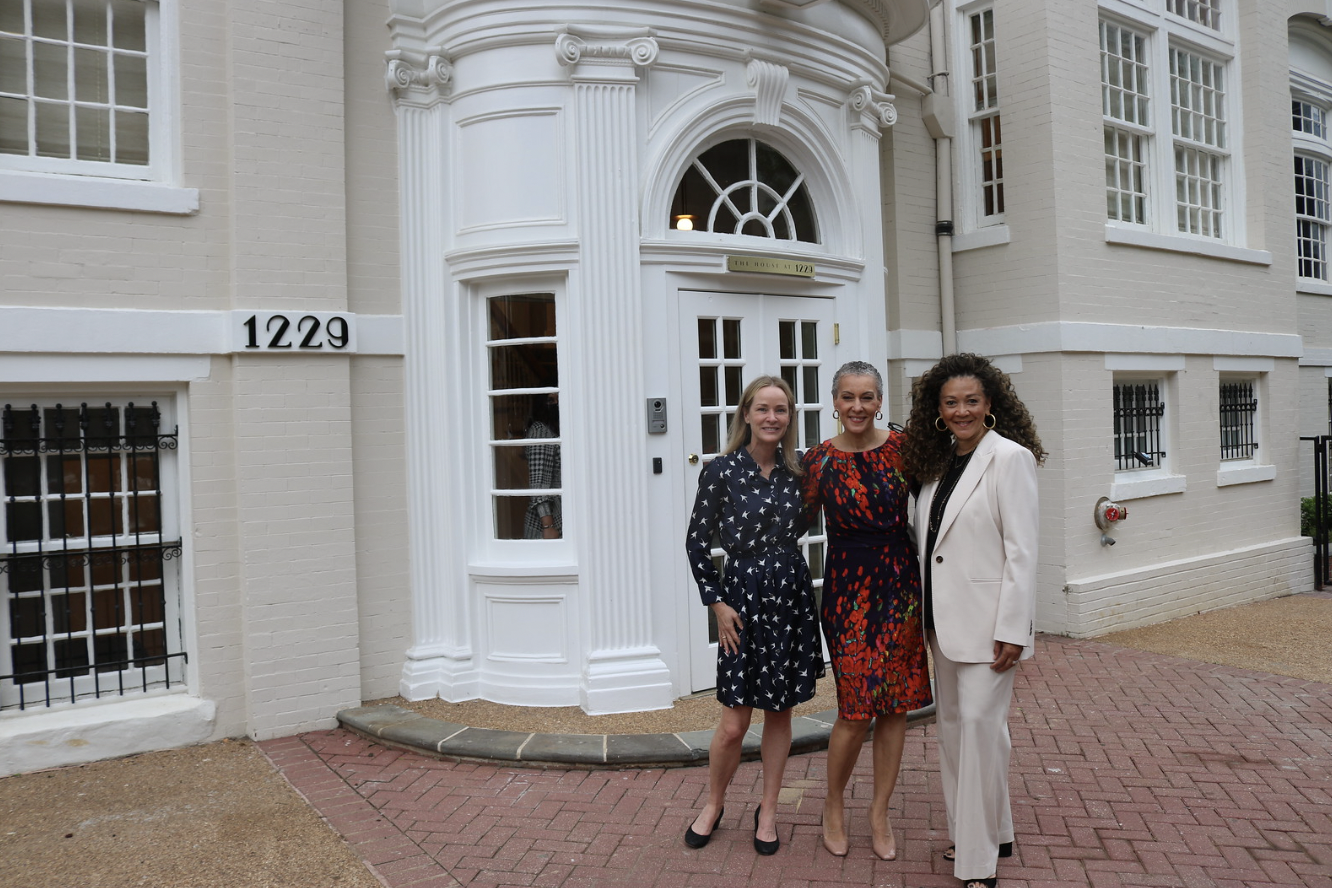 This sneak preview event was moderated by Michele Norris in conversation with Dr. Sharon Malone, one of the nation’s leading Obstetrician and Gynocologists, who has dedicated her practice to focusing on the specific health challenges associated with menopause. 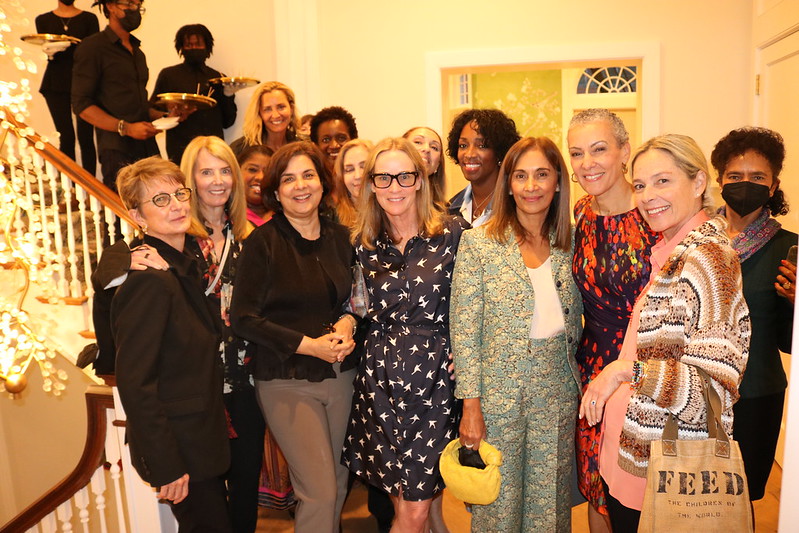 Light breakfast was served in the director’s suite as guests mingled before Kim and Kris began with some remarks about the exhibit, and introduced the special guest, Washington Post veteran Sally Quinn.

Sally began by recounting her history and her memories from the Watergate era, discussing the likes of Ben Bradlee, Kay Graham, Bob Woodward, and Carl Bernstein, and disclosing exclusive insider details on the scandal. After the conversation and breakfast wrapped up, guests were invited to go downstairs for a private tour of the new exhibit, lead by the Portrait Gallery’s senior historian and exhibit curator, Kate Clarke Lemay.

Watergate: Portraiture and Intrigue, explores the 50th anniversary of the watershed moment through portraiture of the era. Displaying 25 objects in various mediums spanning from fine art to pop culture, the exhibit looks at the specific types of media published around Watergate, and looks at the intersection of investigative journalism, activism, and politics.

The exhibit opened on March 25th and will be open to the public through September 5th as part of the museum’s “One Life” series. You can learn more about it here.

You can see the full set of photos from the event here.

The Financial Times hosted its inaugural FTWeekend Festival: US Edition at The Reach at the Kennedy Center in Washington, D.C this past Saturday, May 7th. The Festival showcased the best of The Financial Times and FT Magazine journalism, exploring big ideas in politics, economics, climate and culture. The launch of the US edition follows the success of the annual FTWeekend Festival in London, which began six years ago.

Topics ranged from the new world order and fresh perspectives on communism and capitalism, to style in a post-Covid world, and writing in an age of intolerance and southern cuisine. The theme of the event was The Bigger Picture: A Global Take on the Ideas Stimulating, Diverting – and Unsettling – Our Age.

Alongside these speakers, some of the FT’s most distinguished journalists took the stage, including editor Roula Khalaf; US managing editor Peter Spiegel; US editor-at-large Gillian Tett; and chief economics commentator Martin Wolf; FTWeekend editor Alec Russell; and How to Spend It editor Jo Ellison.

We were honored to highlight the work of Dog Tag Bakery at the 2022 White House Correspondents’ Garden Brunch, and May is Military Appreciation Month at Dog Tag. To express their gratitude for those who have served our country, Dog Tag is calling on you to nominate your loved ones who are connected to the military by highlighting their service and telling their stories, including active-duty service members, veterans, spouses, children, and caregivers.

Dog Tag will select 3 winners at the end of the month to receive their very own tag in Dog Tag Bakery’s dog tag chandelier, composed of over 3,500 dog tags. Winners will receive a dog tag copy to keep at home, as well as a gift box full of bakery goodies! Submit your nominations here.

But anyone can add their loved ones’ names to the chandelier, which includes a custom inscription for a military member (active duty, veteran, spouse, child, or caregiver). The dog tags hang permanently in the chandelier, with a duplicate dog tag mailed to the recipient. To participate, click here to donate!

All donations made throughout Military Appreciation Month support Dog Tag’s innovative and impactful fellowship programming. Gifts of all sizes will make a difference!

Thank you, Dog Tag Bakery, for your service to our veterans.

Jean-Pierre’s current role at the White House is principal deputy press secretary. With her promotion, she will also serve as an Assistant to the President.

The release continues: “Prior to her role on the campaign, she served as Chief Public Affairs Officer for MoveOn.org and an NBC and MSNBC Political Analyst. Jean-Pierre served as Regional Political Director for the White House Office of Political Affairs during the Obama-Biden administration and as Deputy Battleground States Director for President Obama’s 2012 re-election campaign. She served as Southeast Regional Political Director for President Obama’s 2008 campaign, Deputy Campaign Manager for Martin O’Malley for President, Campaign Manager for the ACLU’s Reproductive Freedom Initiative, and Deputy Chief of Staff and Director of Legislative and Budget Affairs for two members in the New York City Council.”

At the outdoor location in Georgetown well wishers greeted them and took photos. Dr. Fauci announced earlier in the week that he would not attend the White House Correspondents Dinner itself.
When the rapper, Fat Joe, approached Dr. Fauci the iPhones went up, including longtime republican consultant Ron Bonjean.

CBS, MTV Entertainment, Comedy Central, Paramount+, and Showtime, otherwise known as Paramount Global, came together to host the #ParamountAfterParty at the Residence of France with Ambassador Philippe Etienne following the White House Correspondents’ Dinner on Saturday, April 30th. The star-studded affair was one of the most sought-after tickets of the weekend.

The company owned the weekend with Comedy Central’s Trevor Noah appearing as the comedian at the dinner, CBS radio’s Steve Portnoy, this year’s President of the White House Correspondents’ Association Dinner, CBS Evening News anchor Norah O’Donnell, who signed a new contract and hosts the only evening new show that originates from Washington, and Showtime Stars Corey Stoll and Desus were among the guests.