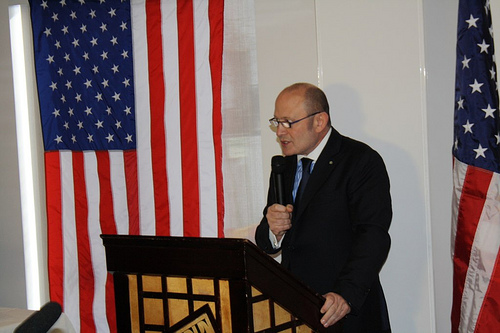 Cafe Milano’s Franco Nuschese welcomed guests to his Georgetown restaurant last night to honor former Secretary of Defense Robert Gates at the Courage and Compassion Award Dinner. Fox News’ Bret Baier emceed the event which was held in support of U.S. Navy SEALs, highlighting the work of the armed forces and their families.

Nuschese called Gates “one of America’s finest patriots” and talked about the causes supported by the evening, including the Navy SEAL Foundation, the Light of Healing Hope Foundation and the Chief James E. Whitehead, Sr. (JROTC) Scholarship Foundation.

Vice Admiral Albert Calland III, USN (Ret.), Chairman of the Navy SEAL Foundation, and Alexandra Villard de Borchgrave, President of the Light of Healing Hope Foundation, were on hand to present the award to Robert Gates.  General James L. Jones, USMC (Ret.) accepted the award on Gates’ behalf, remarking that the Secretary would appreciate the compassion side of the award. “Since the end of world war II… it’s the compassion of men and women in uniform that have really contributed greatly to what this nation is today and probably will be tomorrow,” said Jones.

Keynote speaker Rear Admiral Garry J. Bonelli commented on how a great number of those enlisted today are either married or married with children, therefore creating new motivations and a “new operational imperative” which is family resiliency.  Bonelli says it’s important to do everything we can to take care of the the “other 50% of our fighting forces,” the spouses and families.

This year marks the 50th anniversary of the Navy SEALs, which were started by John F. Kennedy, and have since served on all major military campaigns. The SEALs’ mission is to remain unnoticed but they garnered worldwide attention this past year when SEAL Team 6 took down Osama bin Laden. Baier, who has covered both the Pentagon and the White House, stated that the Navy SEALs “have deployed more often, and fought more close fights, celebrated successes and mounted more losses than any other military unit that has seen combat action since the events of 9-11.”

A trailer of the new movie Act of Valor, which has characters portrayed by active duty Navy SEALs, was played for the crowd. Baier called the movie “very powerful…you see in there that each segment meets the actual Navy SEAL effort, the unconditional courageous compassionate dedication to duty not only for them, but their families.”

The night was topped off with a musical performance by world renown Italian tenor Vittorio Grigolo, giving his first-ever performance of the Star Spangled Banner.

Check out photos from the night here here:

The day after Julia Roberts dined at Cafe Milano, its front facade was covered with the emblem of Tomorrow’s Youth Organization (TYO).  Terry McAuliffe and Hanri Masri greeted guests and shared their mission of TYO that works in disadvantaged areas of the Middle East, enabling children, youth and parents.  Steve Clemons of the New America Foundation, Christine Delargy of CBS and Fishbowl DC’s Matt Dornic were all in attendance.

McAuliffe introduced this powerful video about some of the problems faced in the Middle East and the hope that TYO has brought to the community.