White House coronavirus response coordinator Ashish Jha brought smiles to official Washington’s face on Sunday when he said that the White House Correspondents’ Dinner should go ahead as planned this month, despite the local rise in COVID-19 cases.

Speaking to “Fox News Sunday” Jha said, “We are at a point in this pandemic, Mike, where I think we can gather safely. That’s the key point.” He continued, “I don’t think events like that need to be canceled. I think if people put in good safeguards, they can make it substantially safer, make sure people are vaccinated, make sure you have testing, and improve ventilation.”

“These are the strategies we have learned over the last two years, and if we implement them, do I think it’s safe for people to gather together indoors? Absolutely.” The White House Correspondents’ Association is set to host its annual dinner on April 30, the first time it has been held since the pandemic.

White House Correspondents’ Association President Steven Portnoy, of CBS News Radio, affirmed earlier this month that the dinner would be proceeding, with a mandate that guests show a negative COVID-19 test from within 24 hours of the event.

“We are going to, as a baseline level, require every one of the 2,620 ticket holders at our event to demonstrate on Saturday, April 30, that they have tested negative on a same-day rapid test,” Portnoy told The Hill. “We’re taking it upon ourselves as an association to apply this requirement.”

Exactly how is the President being protected from the virus? The short answer is colored wrist bands. According to Politico Playbook, if you’re a White House staffer or a reporter who’s going to be close to the President, Vice President, or their subsequent spouses, you must first obtain a negative result on a Covid test. That result will get you a one-day wristband that signifies you’re clear to breathe in the oxygen of the Executive Branch.

One technician who handles the Covid testing at the White House told Playbook that they recently added more wristband colors to the rotation. Apparently, fashion-forward staffers were getting frustrated with the lack of variety within color options.

The tech continued, adding that they’ve had press and staffers alike trying to get the gossip on what color the bands will be ahead of time, so appropriate outfits can be coordinated. Who said politicos can’t be stylish?!

Big News on the White House Correspondents Weekend Soiree front. In a release from Politico this morning, eyes widen and hearts raced with the name Bradley Cooper in the final paragraph. The Georgetown graduate who once worked at Cafe Milano is expected as a guest, so is top White House aide Alyssa Mastromonaco at the Sunday Allbritton brunch. Lucky Lady.

Below are details on POLITICO’s coverage and involvement with this year’s White House Correspondents’ Association Dinner – beginning Friday with the release of POLITICO’s must-read WHCD guide and culminating on Sunday with the annual Allbritton-POLITICO Garden Brunch.

WHCD GUIDE – Celebrity Politics: The Lines Blur Between Hollywood and D.C.
This annual magazine edition of POLITICO offers influential dinner attendees and readers alike a sneak peek inside Washington’s biggest weekend. The ultimate guide includes an exclusive interview with comedian and dinner headliner Conan O’Brien, an introduction to the WHCA board, profiles of scholarship and award winners, a look behind the scenes of the Washington Hilton and more. Nearly 40,000 copies of the magazine will be distributed around Washington including at more than 100 Starbucks locations. Stories from the magazine will also be available here.

WATCH LIVE: WHCA SCHOLARSHIP LUNCH – The White House Correspondents’ Association will honor its scholarship recipients at a luncheon on Friday at 1 p.m. POLITICO will livestream the luncheon’s panel discussion with the winners. Watch the event at POLITICO.com/live.

‘THE SCRUM’ PODCAST – POLITICO reporters will preview the weekend’s festivities, examine key moments from past dinners and analyze why Hollywood makes the pilgrimage to the nation’s capital each year in ‘The Scrum,’ POLITICO’s weekly podcast. Subscribe to each weekly installment of ‘The Scrum’ on iTunes.

COMPLETE COVERAGE – As the one-stop destination for coverage of the WHCD weekend, POLITICO will have reporters at each of the biggest events, offering intel on everything from pre-dinner parties to late-night celebrations. Coverage will include live blogging, celebrity interviews, on-the-ground videos and must-see photo galleries. Get the latest in one click: POLITICO WHCD Complete Coverage. 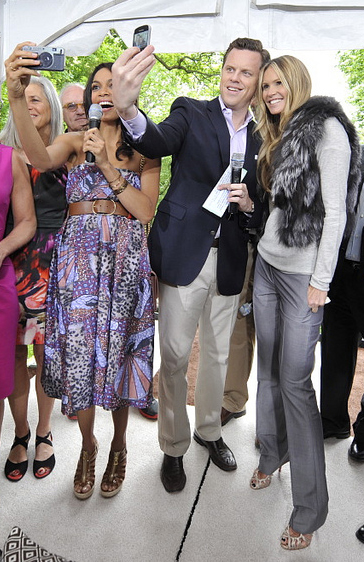 It was another big night for Uggie the dog from “The Artist” who missed the actual WH Correspondents’ Dinner, but was getting lots of love at the Bloomberg/Vanity Fair gala. Goldie Hawn snuggled up with the pup in one of the best moments of the late night gathering.

Guests relaxed, some even kicking off their shoes after a long night of formal speeches and dinner, as the party went on until the early hours of Sunday.  A crowd formed around Ronan Farrow, the son of Woody Allen and Mia Farrow and his friend Obama joke writer, now Hollywood writer, Jon Lovett.

The New Republic has backed off plans for a contest to award 1 ticket to the White House Correspondents’ Dinner for a lucky new subscriber.  The contest included a roundtrip ticket and hotel accommodations for the April 28th event, but the magazine canceled the contest after being told it violated the rules of the White House Correspondents’ Association.

According to a written statement, “After being informed by W.H.C.A. that our offer was in conflict with their policies, The New Republic has suspended this campaign. Our editors look forward to attending the dinner at the end of the month.”

The annual dinner raises money for scholarships and to “honor the professional recipients of the WHCA’s journalism awards” and the association does not approve of other organizations raffling off tickets for commercial purposes.

Time magazine has snagged George Clooney and his girlfriend Stacy Keibler; and Hollywood bigwig Steven Spielberg and his wife, actress Kate Capshaw.  This makes Richard Stengel the top booker of the weekend.

Greta Van Sustern and John Coale finally have some competition.

Newsweek’s Daily Beast is right up there with  Academy award winning actresses Reese Witherspoon and Viola Davis, and former soldier, actor and “Dancing with the Stars” winner J.R. Martinez.   Actress Rashida Jones will be the guest of Fortune.

Follow all the news about the White House Correspondents’ Dinner weekend right here, and take a look at this great moment from the Bloomberg Vanity Fair party when Sarah Palin and Seth Meyers meet.

In the midst of a mid-term election, George Clooney may have Ryan Gosling go back to the ghost of 2004’s election. Gosling, whose garnered praise earlier this year at Sundance with Blue Valentine, is being courted to frontline Farragut North according to Deadline New York.

END_OF_DOCUMENT_TOKEN_TO_BE_REPLACED

As hot as the Bloomberg After-Party is, the pre-party action has always belonged to Lally Graham Weymouth and her Newsweek bash celebrating the WHC dinner.

Every year, she is the eye of the media storm because of her remarkable guest list, specializing in the irresistible from Richard Gere to George Clooney.

Washingtonians have been delighted to have Nick and Nina Clooney as neighbors for the past seven months as he taught at American and thrilled Newseum visitors and media big wigs with a series of programs on TV, movies, and his international campaign on Darfur.